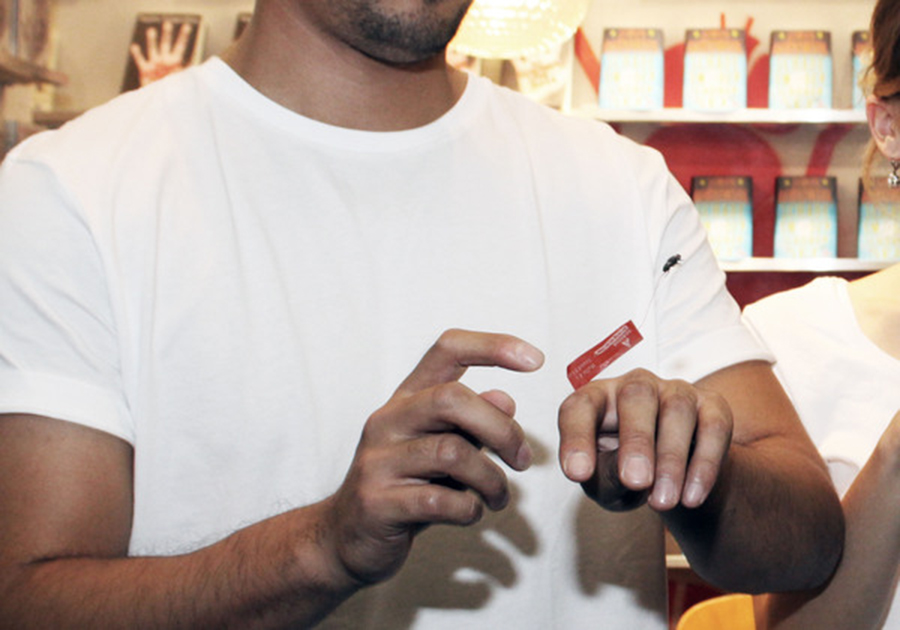 After COVID attracting attendees to your trade show booth is more important than ever. Here’s some inspiration of how to skip the conventional and go all out. It’s called experiential marketing. Most of us know, that to get noticed or learn something new we have to experience it. Educational philosophers like John Dewey or the father of advertising like David Ogilvy, promoted experiences and non conventional ways of thinking. Experience is the best teacher. So why not create a great experience at your next tradeshow. To inspire and motivate you, here are some real life experiential marketing examples with huge results, and a tradeshow takeaway for each one illustrates ideas on how you may incorporate it into your own event.

THE EVENT: A seemingly innocent bright red telephone booth was placed in malls and shopping centers across Hong Kong. Two popular radio hosts connected with booths via video from the Levi’s store and challenged contestants to answer questions or do crazy stunts. The crazier the stunt, the bigger the prize, which was printed out in the booth like a receipt to be redeemed at nearby Levi’s stores.

THE RESULT: As the video mentions, nearly 500,000 people interacted with the booths in a matter of only 3 days! Levi’s video taped the event, put it up on the internet and had an added bonus of generating tons of viral content. thousands of mentions on social media and blogs. Word spread, and Levi’s generated a multitude of publicity and media coverage. The sweetest ROI of all? The campaign drove sales up by 30%.

TRADESHOW TAKEAWAY: It’s campaigns like these that can turn your tradeshow booth from a plane Jane to being the talk of the trade show, not to mention converting your leads into costumers. Interacting on a fun social level with customers gives your brand a lasting impression for future success.

CHALLENGE: How to get TNT’s message across of their slogan “We Know Drama” to a new audience in Belgium with a lasting impression and make a launch campaign worth talking about.

THE EVENT: The Turner-owned TNT network placed a big red button “Somewhere in a little town in Belgium, on a square where nothing really happens,” and goaded people to push it.

THE RESULT: In less than one week the video had over 29 million views on YouTube, 3.8 million Facebook shares, more than 250,000 likes, more than 120,000 tweets, and more than 2,500 blog posts. Viral videos like these keep working for you. Published in 2012 the video now has over 56 million views. All major Belgian media ran stories on the publicity stunt. Massive media attention was national and international worldwide. This generated millions of dollars worth of media coverage across the globe!

TRADESHOW TAKEAWAY: Of coarse you don’t have a street and vehicles available at your tradeshow facility but a push button event can create something worth talking about, dramatically grab attention and increase publicity.

CHALLENGE: To strengthen the Eichborn publisher’s positioning and bring audience to their stand. German publisher Eichborn wanted to show their qualities of being Humorous, Brave and unconventional at the Frankfurt Book Fair.

THE EVENT: Eichborn implemented a truly unique marketing stunt that they called ‘Flyvertising’ that incorporated the brand’s logo: the housefly.

THE RESULT: ‘Flyvertising’ brought tons of traffic to the Eichborn booth not to mention the buzz. HA HA! no pun intended. The online video received 800,000 YouTube clicks within one month, worldwide coverage on TV and in newspapers, and vast numbers of blogs. Unfortunately, The flies were unharmed, who wants to keep a fly alive anyway.

TRADESHOW TAKEAWAY: You don’t have to break the bank to get a great ROI return. Not to mention it really happened at a tradeshow!

CHALLENGE: How to increase tropicana’s brand message associated with starting your day with orange juice.

THE EVENT: Tropicana brought sunlight by illuminating a 36-foot wide helium balloon in the morning at the annual Sunrise Festival of Inuvik, a small arctic Canadian community. It hadn’t seen sunlight in 31 days.

THE RESULT: Tropicana created a commercial from the event and broadcasted the commercial on YouTube and in Television ads, directing viewers to Tropicana’s Facebook page. The Facebook page gained 36,000 fans overnight. The story was featured in over 65 media outlets around the world, providing more than 20 million impressions. And the video has over 500,000 views on YouTube alone. Even the Wikipedia page for Inuvik references Tropicana’s Arctic Sun event.

TRADESHOW TAKEAWAY: You don’t have to pull a stunt with thousands of passersby’s to promote your business. However, trade shows can be a great venue or vehicle to create publicity that will keep working for you in the future.

“Give the pupils something to do, not something to learn; and the doing is of such a nature as to demand thinking; learning naturally results”

These successful marketing examples are a great inspiration. Not only do they inspire, but you can apply them to your own projects. Trade shows are great for trying something unique. By creating something memorable, and within budget, you can expand your reach and market.

If you have a tradeshow experiential marketing success story of your own or know of any to share; we would love to hear from you. thanks